G1213 Book Review of Alina, a song for the telling by Malve von Hassell 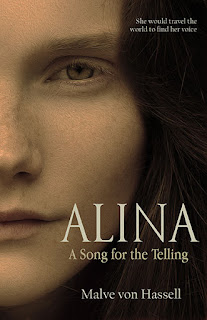 Name of Book: Alina, a song for the tellingAuthor: Malve von Hassell

Summary:
A coming-of-age story of a young woman from Provence in the 12th century.
“You should be grateful, my girl. You have no dowry, and I am doing everything I can to get you settled. You are hardly any man’s dream.” Alina’s brother, Milos, pulled his face into a perfect copy of Aunt Marci’s sour expression, primly pursing his mouth. He had got her querulous tone just right.
Maybe Alina’s aunt was right. She could not possibly hope to become a musician, a trobairitz—impoverished as she was and without the status of a good marriage. But Alina refuses to accept the life her aunt wants to impose on her. At the first opportunity that presents itself, Alina and her brother embark on a pilgrimage to the Holy Land to escape from their aunt’s and uncle’s strictures.
Their journey east takes them through the Byzantine Empire all the way to Jerusalem, where Alina discovers her passion and finds her voice.
Characters:
Main characters include Alina as well as her older brother Milos and plenty of historical characters like Raymond of Tripoli, Stephen of Sancerre, Sibylla of Jerusalem, etc. Alina is a very headstrong girl who doesn't want to be married but instead desires to become a trobairitz, a female troubadour. She is talented, self conscious, yet pragmatic and good with money as well as a talented negotiator. Milos is the only son and in beginning is aimless although he has gift for taking care of horses and has always desired to become a knight like other boys his age. Raymond of Tripoli is willing to do whatever he can to know everything about everyone. Sibylla is also headstrong and doesn't desire to become close to people. Stephen is painted as admirable and sincere albeit an idealistic man.
Theme:
It's possible to find ones talent and voice
Plot:
The story is in first person narrative from Alinas point of view. Something unique I should mention is that the story isn't focused on romance but instead is focused on Alina finding her voice and growing up in Crusader Israel. I also enjoyed the real characters and how memorable they are: namely Sibylla, Raymond of Tripoli and Stephen. I do feel that setting should have been fleshed out more, but it's still a good read.
Author Information:
(From France Book Tours)

Malve von Hassell
is a freelance writer, researcher, and translator.
Working as an independent scholar,
she published The Struggle for Eden: Community Gardens in New York City (Bergin & Garvey 2002)
and Homesteading in New York City 1978-1993: The Divided Heart of Loisaida (Bergin & Garvey 1996).
She has also edited her grandfather Ulrich von Hassell’s memoirs written in prison in 1944,
Der Kreis schließt sich – Aufzeichnungen aus der Haft 1944 (Propylaen Verlag 1994).
She has self-published a children’s picture book, Letters from the Tooth Fairy (Mill City Press, 2012)
and her translation and annotation of a German children’s classic by Tamara Ramsay,
Rennefarre: Dott’s Wonderful Travels and Adventures (Two Harbors Press, 2012).
She has published The Falconer’s Apprentice (namelos, 2015)
and Alina: A Song for the Telling (BHC Press, 2020),
and has another forthcoming historical fiction novel, The Amber Crane (Odyssey Press, 2020).
She is working on a biographical account of a woman coming of age in Germany during World War II.

Opinion:
On the surface Alina should have been a book I enjoyed, but I didn't enjoy it as much as I hoped. From time to time I do enjoy reading YA, and there have been  a lot of amazing YA that has fallen into my hands since I began blogging, and yes, historical YA. Alina has my favorite elements: medieval ages, crusades, religion and something I am familiar with. ( later on I will read Sharon Kay Penmans new story, The Land Beyond the Sea which is set in the same time period, thus I appreciate that Alina served as an unofficial introduction.) Yet on reflection some elements of the story didnt work. I dont think i understood the deeper meaning of Meir Ben Eleazar and Sarah in the story. I love when story has Jewish characters, but I guess a complaint I have is that a lot of times Jews are rescued in order to be friends with main characters, and this story is no exception.  I did appreciate traveling to medieval ages and becoming introduced to the leper king and his sisters and family.

This is for France Book tour
3 out of 5
(0: Stay away unless a masochist 1: Good for insomnia 2: Horrible but readable; 3: Readable and quickly forgettable, 4: Good, enjoyable 5: Buy it, keep it and never let it go.)