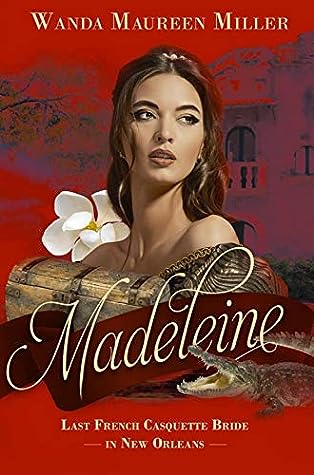 Summary:
In 1728, beautiful, resourceful Madeleine Boucher is one of the last in a group of poor young girls given modest dowries in trunks, or casquettes, by the French government-then shipped off to America, where they are intended as wives for the French settlers in the Louisiana Territory. Despite a series of romantic travails, Madeleine remains fiercely dedicated to finding true passion and securing the promise of her new adopted land, free from the prejudices of the past.
The story of Madeleine and the other casquette girls is the story of New Orleans itself. Like the city, they struggled through Indians, hurricanes, fires, and floods. Like the city, they absorbed the shocks and assimilated the dominance of other cultures, while remaining steadfastly French.
Madeleine's brutal but enlightening journey vividly brings back to life a forgotten era, a history, a people-and the nation they came to call their own.
-Terri Cheney, New York Times bestselling author of Manic and Modern Madness
Characters:
Main character of the story is Madeleine, a beautiful young woman who gets mistaken for an aristocrat and is trying her best to keep that history hidden. Madeleine strongly believes in hard work, land and never giving up on her dreams, which allows her to survive multiple conflicts. She also is a very devout Catholic woman and enjoys helping the nuns. Other characters include the man that would become her husband. Her husband is a profligate who is complete opposite of Madeleine and who often has  gambling and sexual addictions. There are also the husband's slaves, namely Lying Boy, a man of Indigenous ancestry who tends to be like a child, as well as Laughing Girl and Rima and Moses.
Theme:
Grit is what makes survival possible
Plot:
The story is in third person narrative, from what seems to be everyone's point of view. The tale takes place from 1728 up until 1750s perhaps and during that time the reader is getting a glimpse of the start of New Orleans, from disorganization to a wealthy colony that can rival anyone. While the first part tends to be slow, the book picks up at a quick pace and becomes an amazing reading experience.
Author Information:
(From book)
Wanda Maureen Miller (Mo) grew up on an Arkansas farm in the 1940s and 1950s, got educated, moved to California, and taught college English. She has published six books- a historical romance, The French (1983), three textbooks, Reading Faster and Understanding More, Books 1, 2 and 3 (5 editions, 1976 up to 2001); her slightly fictionalized memoir, Last Trip Home (2008) and now Book 1: Madeleine, Last French Casquette Bride in New Orleans. Retired, she plays pickle-ball and is working on Book 2: Solange, Daughter of Last French Casquette Bride in New Orleans
Opinion:
First of all, it's great to read a book that takes place in 1728, prior to American Revolution. I also appreciated in learning information about the French Casquette Brides, which I've had little to no knowledge of. I have to say that the first part of the story, when Madeleine travels to America by ocean wasn't my favorite. However, when she arrives to New Orleans Louisiana, the story quickly took off and I couldn't turn pages fast enough! Madeleine is definitely someone I rooted for and wanted to succeed. I also am crossing my fingers that soon I will have a chance to immerse myself in the sequel.

This is for France book tour
4 out of 5
(0: Stay away unless a masochist 1: Good for insomnia 2: Horrible but readable; 3: Readable and quickly forgettable, 4: Good, enjoyable 5: Buy it, keep it and never let it go.)