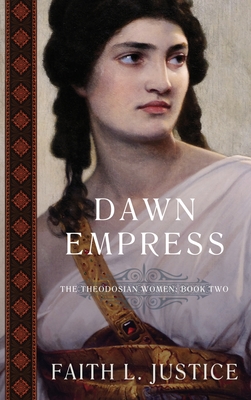 Part of a Series: The Theodosian Women

Summary:
As Rome reels under barbarian assaults, a young girl must step up…
After the Emperor’s unexpected death, ambitious men eye the Eastern Roman throne occupied by seven-year-old Theodosius II. His older sister Princess Pulcheria faces a stark choice: she must find allies and take control of the Eastern court or doom the imperial children to a life of obscurity—or worse! Beloved by the people and respected by the Church, Pulcheria forges her own path to power. Can her piety and steely will protect her brother from military assassins, heretic bishops, scheming eunuchs and—most insidious of all—a beautiful, intelligent bride? Or will she lose all in the trying?
Dawn Empress tells Pulcheria’s little-known and remarkable story. Her accomplishments rival those of Elizabeth I and Catherine the Great as she sets the stage for the dawn of the Byzantine Empire.
Characters:
The main character is Pulcheria, oldest daughter of Arcadius, the previous emperor. Pulcheria is best described as scheming, brilliant, determined, very close minded and manipulative. She is determined to do whatever she can to help her brother stay on the throne, and the influence she wields amongst her siblings as well as officials, church and so forth isn't a joke. She has a strict view point and apparently one can say she and the church are the root for two thousand year hatred for Jews. ( I am sorry, but I can't forgive her for that...) There is also Theo the current emperor of the East  who heavily relies on Pulcheria for everything, although Pulcheria often worries he will fail and lose people's love. There is also Athenais, Theos wife who might have converted to Christianity, but who thinks very differently from her in-laws.
Theme:
There are sacrifices to choices
Plot:
The story is in third person narrative from many character's points of views; Pulcheria dominated maybe 95 percent of the story. To some extent, some advisors as well as Theo and Athenais also told a bit of their sides of the story. There are also some Easter eggs in terms of Placidia, the empress from the Twilight Empress, but it's a stand-alone story. With that said, I will be looking forward to reading about Athenais, and I hope that one day she will write about Emperor Constantine, because I trust the author to make his story secular.
Author Information:
(From the book)
Faith L Justice writes award-winning novels, short stories and articles in Brooklyn, New York. For fun, she likes to dig in the dirt- her garden and various archeological sites. Sample her stories and books, check out her blog, or ask Faith a question at her website: www.faithljustice.com
Opinion:
First of all, I am truly sorry that it took me a long time to read and review  this hidden treasure, because truly, that's what it is. And second of all, as a persecuted ethnic minority, there are places where it was difficult for me to face the history that very few people choose to have awareness of. At times I wondered, what if Pulcheria would have been born in 20th century, would she have readily joined in and advanced anti Jewish agenda? My heart whispers yes. Despite Pulcherias venomous personality, Dawn Empress was truly a joy to read. I loved the fact that it wasn't proselytizing novel, strangely enough because Pulcheria and her sisters chose to dedicate their virginities to serve their brother. I also loved the simplification and explanation of various sects of Christianity. For when Jews began to lose their power and of the church's stance, I would highly recommend Dawn Empress.
This was given for review
5 out of 5
(0: Stay away unless a masochist 1: Good for insomnia 2: Horrible but readable; 3: Readable and quickly forgettable, 4: Good, enjoyable 5: Buy it, keep it and never let it go.)