Book Review of Empire of Exiles by Erin M Evans 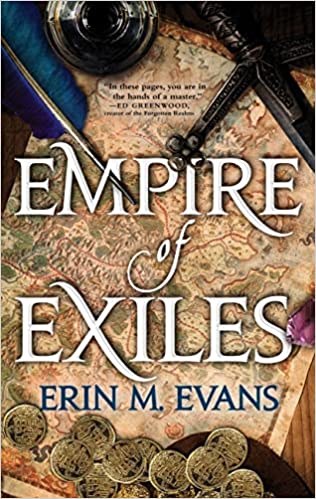 Part of a Series: Books of Usurper

Summary:
Magic, mystery, and revolution collide in this fantasy epic where an unlikely team of mages, scribes, and archivists must band together to unearth a conspiracy that might topple their empire.
"What makes this book special, even by Erin’s lofty goalposts, is the world she weaves around the characters. Detailed and mysterious, a place to explore and relish. Empire of Exiles is highly recommended!” – R.A. Salvatore, author or “The Legend of Drizzt” and the DemonWars novels
“The beginning of a truly epic tale. Deft worldbuilding and wonderful verbal fencing that is a delight to read. In these pages, you are in the hands of a master.” - Ed Greenwood, creator of the Forgotten Realms and internationally bestselling author
Twenty-seven years ago, a Duke with a grudge led a ruthless coup against the empire of Semilla, killing thousands. He failed. The Duke was executed, a terrifyingly powerful sorcerer was imprisoned, and an unwilling princess disappeared.
The empire moved on.
Now, when Quill, an apprentice scribe, arrives in the capital city, he believes he's on a simple errand for another pompous noble: fetch ancient artifacts from the magical Imperial Archives. He's always found his apprenticeship to a lawman to be dull work. But these aren't just any artifacts — these are the instruments of revolution, the banners under which the Duke lead his coup.
Just as the artifacts are unearthed, the city is shaken by a brutal murder that seems to have been caused by a weapon not seen since the days of rebellion. With Quill being the main witness to the murder, and no one in power believing his story, he must join the Archivists — a young mage, a seasoned archivist, and a disillusioned detective — to solve the truth of the attack. And what they uncover will be the key to saving the empire – or destroying it again.
“Empire of Exiles has it all: characters I love, intertwined compelling mysteries in the past and present, plot twists that keep coming, and a unique and fascinating world and magic system!" – Melissa Caruso, author of The Obsidian Tower
“Beautifully wrought and equally ensnaring, this book lived up to and then surpassed all my expectations.” – Cat Rambo, author of You Sexy Thing
Characters:
Main characters include Quill, Amadea, Yinii and Rucha. Quill and his entourage handle various clients and go to the Imperial Archives to retrieve forbidden treasures that will guarantee to spur on a revolution. Quill is also in disbelief about actions that his beloved friend commits. Amadea is an archivist who is basically in charge of taking care of archivists when they get into full alignment with their talents (kind of like a werewolf on a full moon perhaps?) she also has a secret and hidden past that she's not even aware of. Yinii is an ink specialist, a bit of an oddity in both her culture and race and she is uncertain of herself and seems conflicted. Richa is a detective who is determined to find out what is going on and best way to describe him is extremely meticulous and talented at the job he does.
Theme:
Things are not what they seem
Plot:
The story is written in third person narrative from Quill's, Amadea's, Yinii's and Richa's points of view. While most of the novels focus on perhaps few aspects of life like politics or romance or mystery, or even relationships, EMPIRE OF EXILES tends to ask the reader to focus on multiple aspects, namely politics, fantasy and mystery. However my mind couldn't really decide what was more important, and the jargon tended to throw me off the scent. I also felt as if I needed to buy a book that explained the world to me. The story is divided into two timelines: that of Duke of Khirazzi's last days and his younger brother's attempts to find out the mysterty of the Grave Spurned Princess and then the main storyline. (I liked the Duke of Khirazzi's line a lot more than the main narrative.)
Author Information:
(From goodreads)
N/A
Opinion:
What one person didn't enjoy, another will love. Quite unfortunately for me, this was the case for EMPIRE OF EXILES by Erin M. Evans. On the surface it appeared like a story I would enjoy: fantasy, a story of mystery and world where nothing was as it appeared. However, that was not to be: the first thing that threw me off is the feeling where I am thrust into the world without help or support. The author had a constant repetition of fictional nations in the first hundred pages, but I couldn't really identify or understand their characteristics. Also as well, its not just the humans but some had animal characteristics like tentacles or horns or multiple eyes. Some of the parts I was able to understand, but at the same time I was asked to understand the world, I also had to attempt to understand what was going on in terms of mystery which kind of stressed my attention span.

3 out of 5
(0: Stay away unless a masochist 1: Good for insomnia 2: Horrible but readable; 3: Readable and quickly forgettable, 4: Good, enjoyable 5: Buy it, keep it and never let it go.)
No longer owned